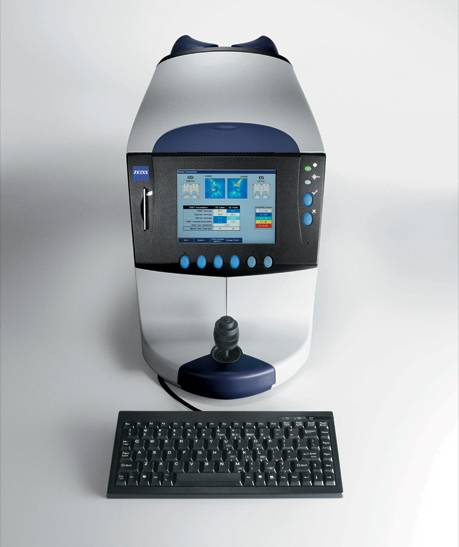 The GDx uses a laser to determine the thickness of the nerve fiber layer. Older glaucoma tests measure eye pressure or measure the effect that glaucoma has on the overall visual field. Although these older tests are extremely important in the treatment and management of glaucoma, it is crucial determine early what damage glaucoma can cause to the nerve fiber layer in the back of the eye.

The nerve fiber layer consists of millions of individual fibers called "axons" that surround the optic nerve and spread out over the retina. In glaucoma, considerable nerve fiber layer damage may have already occurred by the time any vision loss is noticed. Glaucoma is known as the "sneak thief of sight," because patients are not aware until significant vision loss has occurred.

The procedure is painless and is usually performed on an undilated pupil. The thickness of the nerve fiber layer is then compared with the nerve fiber layer of a data base of normal eyes of glaucoma free, healthy patient of the same race and age. A thinning of the fibers indicates glaucoma.

Dr. Rodriguez analyzes the graphs and statistical data that indicate the probability of glaucoma. The GDx provides Dr. Rodriguez the unique opportunity not only to better manage his glaucoma patients, but also to take patients who are at-risk and identify them before they suffer any damage.

Wednesday:            the office is closed: Dr. Rodriguez teaches and is involved in professional activities